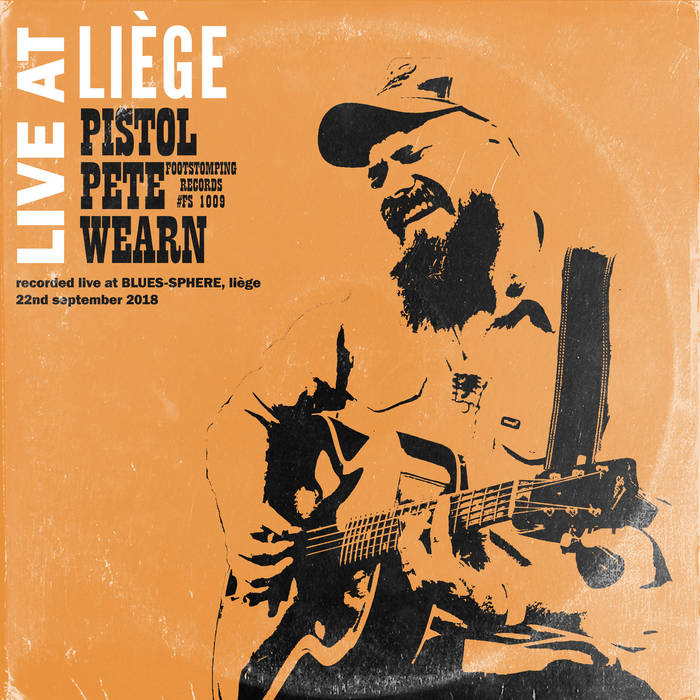 Thirteen tracks of ragged acoustic blues recorded live in Belgium, including a mix of traditional & original songs from Pistol Pete's back catalogue, along with a brand new original and a previously unheard cover of the dustbowl classic Nobody Knows You.l

Live at Liège is a thirteen-track LP recorded at the Belgian city’s Blues-Sphere venue, during Wearn’s autumn 2018 European tour. And, to celebrate five full-time years on the live blues circuit, Wearn is making it available free of charge.

The album features a mix of new interpretations of blues favourites – such as RL Burnside’s “Going Down South” and the classic “Nobody Knows You (When You’re Down and Out)” – alongside some of Wearn’s best original material, including first-airings for some songs, as well as
tunes taken from 2016’s Service Station Coffee (“as true as it gets” – Blues Blast Magazine).

“The European tour was the culmination of a great year for me,” explains Wearn, whose 2018 was spent touring an album of traditional material, Timber Framed. “So releasing this record feels like a celebration of sorts – and a great way to share with old and new fans alike a flavour of what I do live.”

Wearn swapped life as a Staffordshire-based barista for a full-time blues career in 2014, having poured espressos for ten years whilst performing in the highly rated electric blues outfit .44 Pistol at the weekends. Since then, he has attracted acclaim far and wide, with Maverick naming him “a master slide guitar virtuoso,” and R2 declaring him “a talent to watch.”

Live at Liège serves as both a summation of Wearn’s career to date and a statement of intent for the future. The new material it features in particular showcases Wearn’s addition of finger- picking gentility to his raw blues sound, and promises great things for his next studio-based project.

“I wanted the album to be a bit of a present to my existing fans, but also act as something of a sampler for people just discovering my music,” Wearn adds. “It’s a sort of fifth birthday present to my blues career!” Having made a name for himself on the live circuit, and supported luminaries such as The Pretty Things, Billy Branch, Mud Morganfield and Jonathan Byrd, Wearn will continue to rise on the strength of Live at Liège. A talent to watch indeed.

I love live albums. That’s the answer to the question everyone will inevitably ask: why am I putting out another one when that’s what the last thing was? They may be out of fashion. I may be fighting in the face of popular opinion and perhaps the course of history, but I still love concert records.

I remember the first time my Dad played Lynyrd Skynyrd’s One More From The Road for me at the age of ten. The whoops. The cheers. The southern drawl declaring “I’m hot as a fox in a forest fire”. The uncanny sense that I was sharing a sizzling moment in a sweaty nineteen-seventies Atlanta concert hall from a living room in drizzly nineteen-nineties Wiltshire via the time-machine of a crackling piece of vinyl.

And they have stayed with me. Through B. B. King Live at The Apollo and Johnny Cash At San Quentin and Burnside on Burnside and Muddy Waters at Newport 1960 and Bear’s Choice and The 1968 Memphis Country Blues Festival, whoever my new favourite artist is, it’s always their live stuff that speaks to me the most.

I always think that out there in front of an audience is the real measure of a musician. I have a huge amount of admiration for the craftsmanship that goes into making a studio masterpiece, but they are a different beast to the live show. They don’t capture that spark of a great gig, that crackle in the air, that moment of well-rehearsed spontaneity, going down, not exactly the way it was meant to, but somehow even better.

So, five years on the road with my solo show and this is where we’re at. It’s still me playing the guitar, stamping my foot on a wooden box, and growling out words. I never promised to reinvent the wheel, and I don’t suppose there’s any danger that I might. Hopefully what you’ll hear is something real, or at least as real as a British man singing music belonging to a tradition from four-and-a-half thousand miles away can aspire to.

With luck this album is different too. The last one was all new stuff, and this is what you might term The Career Retrospective, though I really do feel like I’m just getting started. There are songs I used to play with .44 Pistol a decade or more ago and songs from my first demo and both my other solo albums as well as some new things. Consider it a sampler of what I’m about, musically speaking, if you like. A snapshot of one night in Belgium, but also a taste of the music back then & right now & still to come.

Thanks must go to Nia & Brit; Dan Hartland; Jean Paul Brilmaker; Matt & Lisa Woosey; Anna Leinhardt; Olli Zilk; & everyone else who offered their support & assistance during the 2018 European Tour.

"If this don't get at least one of your feet stomping, then there's really no hope for you..." - Indie Music Mag

"music to drink, dance and stomp your feet along to... a real stripped down blues session in all its glory." - Derby Gig Guide

Bandcamp Daily  your guide to the world of Bandcamp